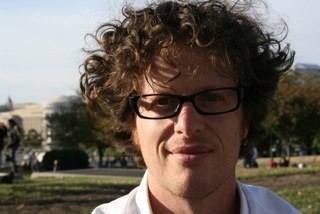 Peter Byck at House of Commons

“What Polarized Country?” –
Stories from the making and promoting of carbon nation

Accomplished documentary director Peter Byck is currently on the road promoting his new climate change solutions movie, carbon nation.  In his 30-60 minute humorous and inspiring presentation, “What Polarized Country?”, Byck delves into his conversations with Americans from all political stripes about clean energy, wasting energy, national & energy security.  Byck is finding, one person at a time, that we are not a polarized country.  When we actually listen to each other, difficult in today’s hyped-up 24 hour news cycle, we find a great common ground – a vast area of agreement in the vital landscape of energy – how do we make it, who do we get it from, how clean do we want it and how well do we use it?
Byck recounts stories from the filming: the one-armed cotton farmer from Texas who single-handedly built the world’s largest wind farm; the wild Alaskan who is revolutionizing geothermal power all the while not believing that humans cause climate change; the retired Army Colonel who’s leading the green hawk movement, saving soldiers’ lives by creating more energy efficient forward operating bases – bases that need less easily targeted fuel supplies.
Byck tells of one specific conversation with a conservative tea-party member – a man who is sure he will disagree with everything Byck has to say, simply by learning Byck’s made a movie about climate change solutions.  Byck and the conservative break down how they would run the country – how they would spend tax dollars.  And both are shocked to realize that they agree on about 90% of the issues.  They discover that we are not a polarized country – we’re just being told over and over again that we are – and good people, from all over the country, are believing it – and acting as if we are polarized.  That’s where the trouble begins.  Byck is learning that we don’t have to buy the bull – that we can really listen to folks with varying opinions – and be amazed at how much common ground there is – “What Polarized Country?”

carbon nation praise:
From the Right:
Evangelical Environmental Network: “I found carbon nation to be the best film on climate change that I've seen.  Not only is it simply and incredibly well-made film, its focus on solutions is quite empowering.  But it's the stories of Red State folks creating the clean energy revolution that steal the show. Entertaining, informative, empowering -- quite a combination.”
From the Left:
The Huffington Post: “This is not just a film worth seeing, it is one that is well worth sharing – as widely as possible.”
From the Military:
Steven M. Anderson, US Army (ret): “Without a doubt the best documentary I have ever seen on the energy situation… not too technical or preachy, often amusing and actually lots of fun to watch.”