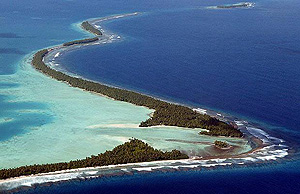 Why choose ".tv" as one of the carbon nation domain names? see www.carbonnation.tv

The answer to this question is further evidence of carbon nation's commitment to expand public awareness regarding all matters of climate change, and climate change solutions.

The ".tv" extension doesn't stand for 'television'.  Tuvalu had a stroke of financial fortune.  When country code top-level domain names were shared out, Tuvalu was granted the eminently marketable ".tv". They are using a portion of the funds generated from the sale of their .tv address to pay for the yearly U.N. fees. It is estimated that by the year 2100, their chain of islands will be completely submerged by the waters of the South Pacific and/or uninhabitable.

Tuvalu, formerly known as Ellice Islands, is a Polynesian island, located midway between Hawaii and Australia.  It's population of approximately 12, 500 make it the second-least populous sovereign state in the world.  Only Vatican City has fewer inhabitants. 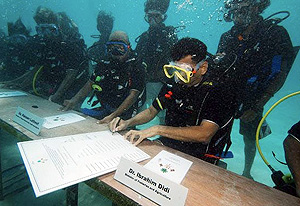 The Maldives recently staged a cabinet meeting underwater to highlight the problems facing the country. IPCC predictions suggest that rising sea levels will make the country virtually uninhabitable by 2100

Tuvalu consists of 4-reef islands and 5-true atolls, totalling only about 26 square kilometres.  The highest elevation is 15 feet above sea level. This is second only to the Maldives, with average ground level of 5ft. above sea level.

The Tuvaluans are raising awareness and money so they can relocate to New Zealand.  Their spokesman, Ian Fry, was present at the Copenhagen Climate Change Conference in December 2009, and raised strong concern for the future of Tuvalu and the resettlement of its people.  Tuvalu specifically joined the UN to highlight climate change.

The domain (".tv") is currently operated by dotTV, a VeriSign company; the Tuvalu government owns twenty percent of the company. In 2000, Tuvalu negotiated a contract leasing its Internet domain name ".tv" for $50 million in royalties over a 12-year period. The Tuvalu government receives a quarterly payment of US$1 million for use of the top-level domain.

For more information see Why ".tv"?